The Peyote bracelet is traditional Huichol jewelry, re-designed in a modern simplistic way. Intended to be a powerful and significant statement piece that has meaning beyond its beauty.

From the time they are children, they learn how to communicate with the spirit world through symbols and rituals, thus for the Huichol,  beadwork is more than mere aesthetic expression. The symbols in the jewelry reflect the Huichol culture and shamanic tradition. Like icons, they are documents of ancient wisdom.

Our Tulum concept store is open from 9am -9pm ever

Would you like to customize your own unique potter

I can’t begin to describe how honored we feel wh

The free flow skirt is your perfect go-to number f

Have you visited our new boutique in La Veleta, Tu

Final days in Oaxaca!! Thank you to everyone who h

Our muse @camijls wears the Temple of the Sun chok

The Rose silk slip is back in store!! This dress

The Orissa Dress is all about sophistication and e

Handwoven tassel blankets available in all our fav 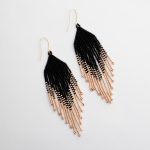